1) How many Members of the European Parliament (MEP) will represent the UK after these elections?
There will be 72 MEPs representing the United Kingdom. This is a reduction from the 78 we currently have.

3) How many MEP are elected to represent that constituency?

Compare this with the table at Wikipedia

4) How many votes do you have?
If you are eligible to vote then you will be able to cast one vote.

6) How do they determine who will represent you when all the votes have been counted?
The system is known as the d'Hondt method, d'Hondt being the surname of the Belgian mathematician who devised the technique. The best way to explain the method is to work through an example. Don't be put off it is really quite simple. 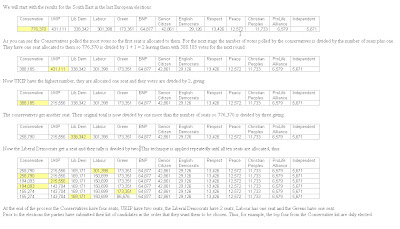 Hi Paul,
In reference to the d'Hondt method, are the parties lists of candidates publicly published prior to the election i.e. will we know at least a few individuals that are likely to be elected?
Cheers,
Brad

The Blogs I Read