The curve in this instance is the theoretical curve on a graph. Specifically, a graph that has an x-axis that represents the income tax rate in percent and a y-axis that represents the revenue generated for each possible tax rate. Initially one might expect the graph to be a straight line. Clearly the tax revenue from a 0% tax rate is 0. As the tax rate increases the tax revenue increases until all the income is received as tax thus the graph might look something like this: 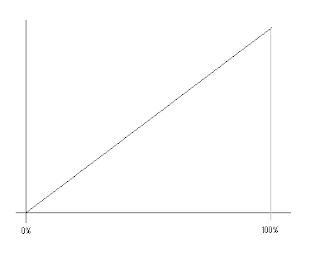 However, a moments thought shows that this is not going to be the case. If you are going to be taxed at 100% of your income then you would not bother to work, why would you? You can sit at home doing nothing and be no worse off than working 40 hours a week. We can conclude therefore that the revenue generated from a 100% tax rate would be nothing. This means that we know four things about our graph.

These four facts mean that we can confidently conclude that the curve looks like this: 
This, then, is what is known as the Laffer curve. Unfortunately, the one potentially useful fact that we cannot glean form this theoretical curve is at which value the tax revenue starts to fall. Note then this news article which quotes the Institute for Fiscal Studies who estimate that the 50p tax rate is costing £500 million per year as opposed to the Treasury estimate of an income of £2,700 million per year. By 'costing' they mean that overall tax revenue is down which means that this tax raising revenue has made the country worse off. Let me repeat that, we are worse off. How rubbish must our tax collection service be that it cannot identify this decrease? Or, assuming our leaders were well aware that this would not increase the tax take, is it possible to believe that this tax rate was introduced for any reason other than to satisfy the politics of envy?
Posted by Paul Coombes at 09:52

The Blogs I Read